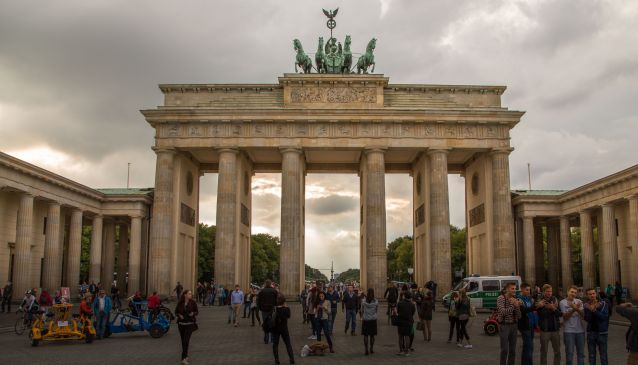 The majestic Brandenburger Tor makes a great starting point for a sightseeing tour of Berlin, with many of Berlin's historic sites within walking distance.

Brandenburger Tor is Best For

The Brandenburger Tor is situated on Pariser Platz on the intersection of Unter den Linden and Ebertstraße and is arguably Berlin's, if not Germany's, best known and most visited landmark.

Commissioned by King Frederick William II of Prussia to represent peace, the gate marked the entrance to Unter den Linden, Berlin's famous boulevard which used to lead from the city gate to the Prussian city palace.  The Brandburger Tor consists of 12 paired columns creating five archways.  From 1814 until 1919 only the royal family as well as members of the aristocratic Pfuel Family were allowed to travel through the centre archway, leaving the two outermost passages for the citizenry.

Designed and built in the neo-classical style by Prussian builder and architect Carl Gotthard Langhans, the triumphal arch was completed in 1791, its design recalling the Propylaea (The gateway to the Acropolis in Athens).  Atop the gate stands a quadriga, a roman chariot drawn by four horses, driven by Victoria, the roman goddess of Victory.   The quadriga was designed by Johann Gottfried Schadow 1793 as the Quadriga of Victory.

During the final years of the 2nd World War the Brandenburger Tor suffered substantial damage, however it was one of the few structures in the area that managed to survive and was repaired in an uncharacteristic joint effort of the governments of both East and West Germany.
After the building of the Berlin Wall on the 13th of August 1961 the Brandburger Tor existed in a kind of no mans land, off limits to citizens of both parts of the city until the walls fall on the 9th of November 1989 when it became a symbol of freedom and unity.

The quandary of the Quadriga...

The original design featured Victoria holding an Olive wreath.  During Napoleon's occupation of Berlin in 1806 the Statue was removed and taken to Paris where it remained until it was returned to Berlin in 1814 after Napoleon's defeat.  Upon its return, the olive branch was replaced with the iron cross, a Prussian military decoration first awarded by Friedrich Wilhelm III of Prussia during the Napoleonic Wars.

At the end of World War two the Brandenburger Tor found itself positioned inside the newly established East Berlin.  The new communist government decided that it wouldn't be prudent to display a symbol of Prussian military and had the iron cross removed.
After the fall of the Berlin Wall and the reunification of German, the Victoria was re-united with her iron cross.