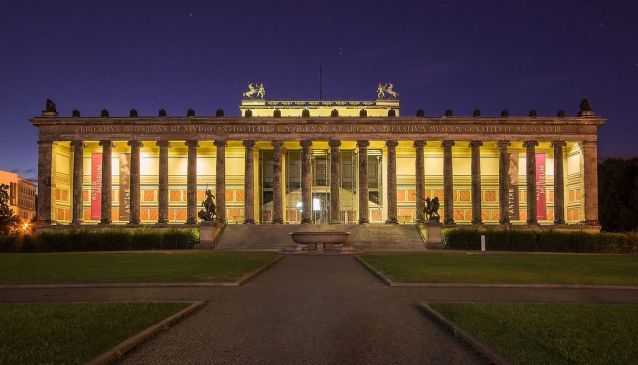 Housing the Collection of Classical Antiquities, the Altes Museum exhibits an extensive collections of Roman and Greek artefacts.

The Altes Museum, or Old Museum, was completed in 1830 in neoclassical style and is one of the most important buildings designed by architect Karl Friedrich Schinkel.  It was originally built to house the entirety of Berlin's art collection, a task that quickly became too large, and is now home to the Collection of Classical Antiquities.

Originally conceived to tie into the ensemble of buildings that enclosed the Lustgarten; the Berliner Dom, the City Palace, and the Zeughaus (Armory), the Altes Museum, or Königliches Museum (Royal Museum) as it was originally known, was designed as a place of science and art.  Taking classical Greek architecture as his inspiration, Schinkel incorporated the Ionic order along the 87m wide façade of the building with 18 Ionic columns supporting the portico.  Atop the columns sit 18 eagles, perched on an inscription which reads:

Friedrich Wilhelm III founded this museum for the study of all forms of antiquities and of the liberal arts in 1828.

Largely destroyed by fire during the last years of the Second World War, the Altes Museum was the first on Museum Island to undergo renovation from 1951 to 1966.

Pick up a Berlin WelcomeCard Museumsinsel to receive free entry into all the museums on Museum Island, as well as unlimited travel on Berlins extensive public transport network.