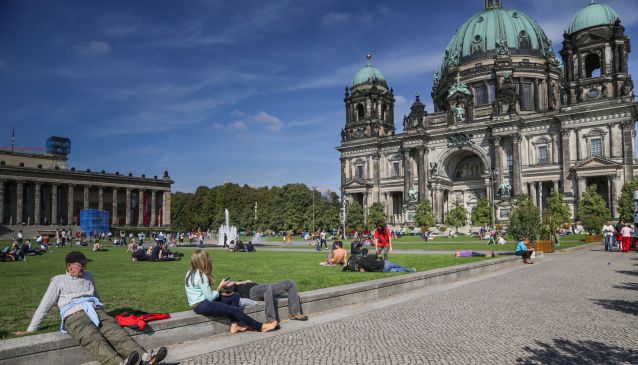 Museum Island is Best For

Berlin's Museumsinsel (Museum Island) is the name given to the northern half of a small island in the middle of the river Spree in the heart of Berlin, Mitte.  True to its name, Museum Island houses a small collection of 5 impressive museums of cultural and architectural importance.

Click here to save up to 50% by purchasing a daily ticket for all 5 museums, as well as being able to skip the queue at each museum.

Originally a residential area and the site of the original settlement of Cölln, King Frederick William IV of Prussia dedicated it to 'art and science' in 1841 and the Berlin State Museums maintain the five museums now residing there. Each museum was designed to organically represent the art it houses beginning with the Altes museum, built in 1830 to house the collection of Royal Antiquities, which had been excavated by German archeological teams throughout the 19th century.

The island was awarded UNESCO world heritage status in 1999 and since then plans for a full scale renovation are underway to turn it into a state of the art cultural hot spot with many new proposals planned: A promenade linking the buildings, new central entrance, cafes, restoration of the Alte National Gallery's gardens to their original 1900 appearance and an extension of the Pergamon Museum. Hopefully completed by 2015!

Museumsinsel is made up of the following buildings:

The Altes Museum (Old Museum): The oldest museum on the island. Built in 1830, the Altes Museum houses Greek and Roman objects and various exhibits covering the 19th Century. Skip the queue tickets HERE

The Neues Museum (New Museum): Built in 1859 the Neues Museum was all but destroyed in World War 2.  Rebuilt, the museum re-opened in 2009 for the Egyptian Musuem of Berlin and houses a collection of Egyptian artifacts including the 'Bust of Nefertiti'.  Skip the queue tickets HERE

The Bode Museum:  Built in 1904, the Bode Museum houses collections of sculpture as well as late Antique and Byzantine art. Skip the queue tickets HERE

The Pergamon Museum: The last of the museums to be built on the island in 1930 the museum houses items of ancient architecture, including significant buildings like the Greek Pergamon Altar and the Ishtar Gates of Babylon.  Skip the queue tickets HERE

The Alte Nationalgalerie (The Old National Gallery): Built in 1897, the gallery houses a collection of 19th century art.  Skip the queue tickets HERE

The Lustgarten.  Originally built as kitchen garden for the nearby palace, the Lustgarten, or 'pleasure garden' has been used as a military parade ground, site of mass rallies and now, a public park.

The Berliner Dom:  The Berlin Cathedral, a grand neo-renaissance building completed in 1905 and re-constructed from 1975 till 1993.