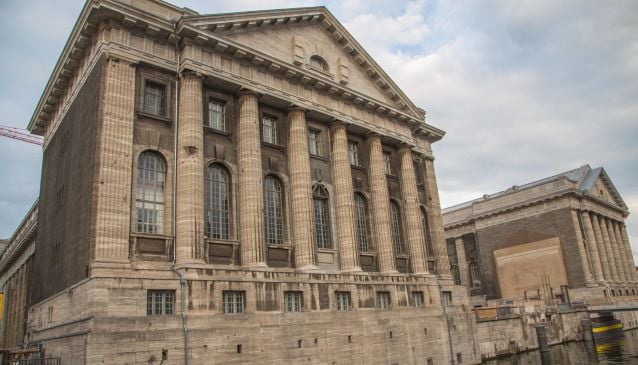 The highlight of this museum, and worth the price of admission alone, is the amazing Pergamon Alter for which the museum gets its name.

The Pergamon Museum on Berlin's Museumsinsel (Museum Island) is one of Germany's most visited museums with over 1,400,000 visitors per year.  The highlight of the collection is without a doubt the reconstructed Pergamon Altar built in Ancient Greece in the 2nd Century BC depicting the battle between the Olympian Gods and the Titans.  It is worth the price of admission alone to spend some time marvelling at this amazing piece.

The Pergamon Museum comprises three separate collections that can be accessed for the one admission price:

The Collection of Classical Antiquities:
Artwork and artifacts from Roman and Greek antiquity.  In addition to the Pergamon Altar and the Market Gate of Miletus the collection includes sculptures, vases, jewellery, bronzes and architectural remains.

The Museum of the Ancient Near East

Alongside the Louvre and the British Museum, the Museum of the Ancient Near East houses one of the world's most important collections of oriental treasures.  Originating from the regions of Sumer, Assyria and Babylon, which today includes Iraq, Syria and Turkey, the collection covers around 6,000 years of history, art and culture in the region.  Included are sculptures, reliefs, inscriptions, vases and other small items in addition to three very impressive larger pieces, The Ishtar Gate and Procession Way of Babylon, as well as the throne room façade of King Nebuchadnezzar II (604-562 BC).

The Museum of Islamic Art

The Museum of Islamic Art houses works from the 8th to the 19th Century originating from an area stretching from Spain to India.  The collection encompasses arts and crafts, jewellery, carpets, carvings, and manuscripts.  In addition there are a number of architectural decorations, including the Mschatta Façade, and the Aleppo Room.

Plans for the constuction of the Pergamon Museum were drawn up in 1907 when it became clear that amount of art and archaeological treasures being excavated could not be adequately displayed within the existing museums.   Work began in 1910 and continued through the First World War as well as the great depression until its completion in 1930.  The building suffered substantial damage during the bombing raids towards the end of the Second World War but thankfully the majority of the pieces had been stored elsewhere for protection.  The Soviet Army, as war reparations, gathered up much of the collection and shipped it Russia.  Most of the collection was returned to then East Germany in the 1950s however, due to Russian restitution laws, some of the collection is yet to be returned.

Tickets can be purchased at the museum or on-line.  If you are planning to visit during summer or school holidays we suggest booking online to avoid some substantial queue times.
€12/ €6, Children under 18 Free.

In addition to single tickets there are also a couple of other options if you are planning to visit multiple museums and art galleries during your time in Berlin - Check out our guide to tourist discount cards for more information.