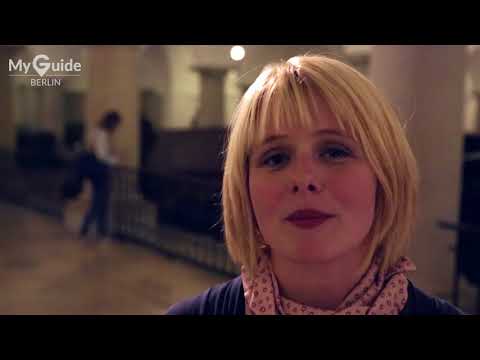 Head up to the viewing platform for some great views over Berlin.

To visit the Berlin Dom costs 7 € and is well worth it.  The walls and ceiling of this ornate church are really quite beautiful, and the view from the viewing platform is worth the price of admission alone.  The 100m high platform circles the dome and provides stunning views over Museum Island, Alexanderplatz, Unter den Linden, and Hackescher Markt.  You can even see the Brandenburger Tor and Reichstaggebäude in the distance and you'll get a great aerial view over the re-building of the new city palace.

Church Services at the Berliner Dom

If you are look for a church service to visit while in Berlin, services are held Monday to Saturday at midday, and every evening at 6pm.

Highlights of the Berliner Dom

Sauer Organ:  At the time of building this organ built by court organ builder Wilhelm Sauer was the largest in Germany and is today the largest remaining late romantic organ in its original condition.  Organ concerts are held regularly and the organ is also used in the twice daily church services.

Dome:  The 70m tall dome is simply breathtaking.  The 8 mosaics which present the beatitudes from the Sermon on the Mount are each 39 square meters large and are made up of around 500,000 individual tiles in around 2000 different colours.  Damaged beyond repair during the war, they were reproduced to the original surviving plans and unveiled in 2002.

Viewing Platform:  If you are looking for a great view of the city and a little exercise then you should definitely head up 270 steps to the viewing platform.  The 'Dome Walkway' provides a 360° view over Berlin, with views of virtually all of Berlin's famous landmarks.

Crypt:  The Hohenzollern Crypt, together with the sarcophagi in the sermon church of the Berliner Dom, is one of the world's most significant royal burial sites, with over 94 entombments dating from the end of the 16th Century to the beginning of the 20th Century.

Short History of the Berliner Dom

The history of the Berliner Dom actually begins in 1465 when the catholic St Erasmus chapel located on the grounds of the newly built city palace was elevated to the status of Collegiate Church.  At the time, such collegiate churches were bestowed with revenues and estates and were very similar in status to cathedrals.  The German word for such churches is Domkirche, which is where the Berliner Dom received its name.

In 1750 The new church built by Johann Boumann the Elder was completed to the north of the city palace on the site of the present day Berliner Dom.  All tombs and sarcophagi were transferred to the new crypt.

Construction began in 1842 on a grand basilica based on plans by August Stüler but due to financial considerations was abandoned with only the burial ground being completed.
Finally in 1893, construction began on the building that is still standing today.  Designed by Julius Carl Raschdorff, the building was completed in 11 years at a cost of 11.5 million German Marks.  The Berliner Dom was consecrated in 1905 and was built in a highly ornate neo-renaissance style and is a strong example of Prussian Historicist Architecture popular at the time.

During the Second World War the building suffered significant damage, and in 1944 an allied incendiary bomb caused the support structure of the dome to catch fire.  Due to its location it was not possible to extinguish and it eventually caused the collapse of the great dome, spreading fire throughout the building including the crypt below.  At the end of the war the building was basically a ruin, with vandals and weather causing additional damage.
After the war, a scarcity of building materials meant that only in 1953 was restoration work started, with the erection of a temporary dome.

In 1975, with support of the German Protestant Church and the government of West Germany, work began on a massive reconstruction project which was only completed in 2002, when the last of the faithfully reproduced mosaics were unveiled in the impressive dome. 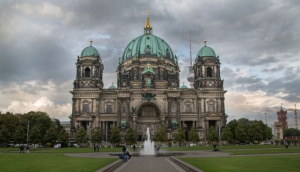 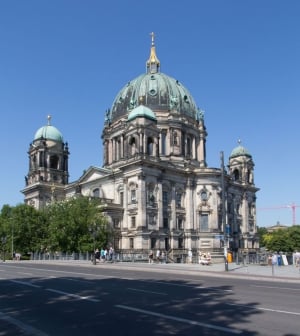 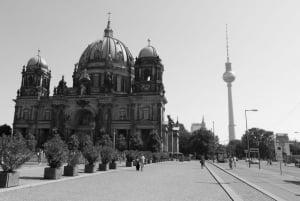 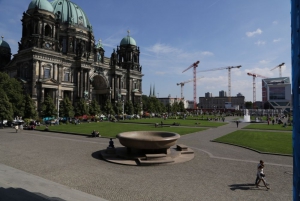 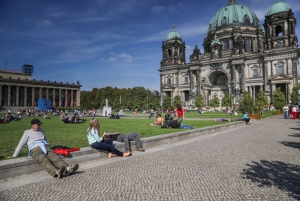 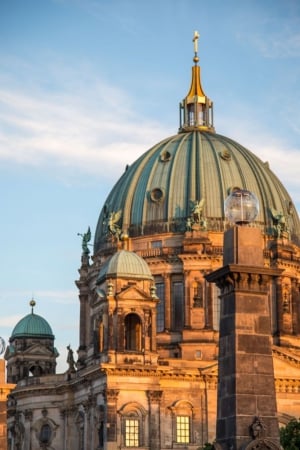 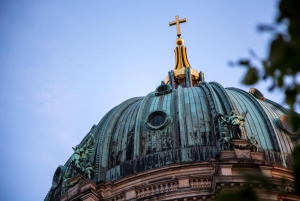 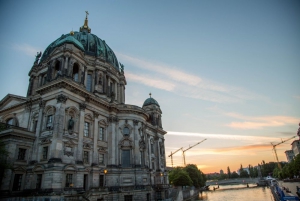