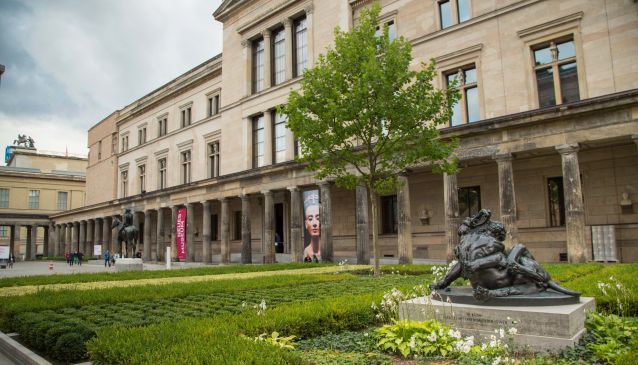 Equally as impressive as the collection it houses is the museum itself. The recently reconstructed museum is a wonderful mixture of original and modern which despite being worlds apart architecturally, are combined with great sense of purpose to create a magnificent space.

The Neues Museum was the second museum to be built on Museum Island and was required to house the growing collection that could no longer be contained in the Altes Museum, including the Ethnographic and Egyptian collections.  The museum continues to house the Egyptian museum with its papyrus collection as well as the bust of Nefertiti in addition artefacts from the Stone Age and other prehistoric eras.

Completed in 1855 to designs by architect Friedrich August Stüler, the museum is important historically because it was one of the first to employ new steam engine technology as well as the use of steel reinforcement in its construction.  During the Second World War, the Altes Museum was the most badly damaged of the Museums on Museum Island and was reduced to ruins and left to decay until 1986 when the East German government undertook a restoration effort.  The reconstruction was halted by the fall of the Berlin Wall and German unification and it wasn't until 1997 that work resumed under the direction of English architect David Chipperfield.

Completed in 2009, English architect David Chipperfield's reconstruction is an amazing mixture of old and new, ancient and modern. Chipperfield went room-by-room, restoring what existed of the original walls, pillars, windows and other architectural details.  He then added, rather than reconstructed and created a space that is a magnificent melding of two worlds.