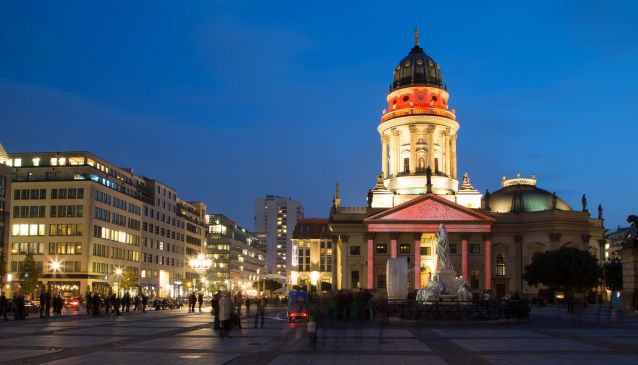 The Deutsche Dom currently houses an exhibition entitled Milestones, Setbacks, Sidetracks, The Path to Parliamentary Democracy in Germany as part of the Bundestag's museum on German parliamentary history.

The Deutscher Dom, or German Cathedral, is the colloquial name for the Neue Kirche, or New Church located on the Gendarmenmarkt in Berlin Mitte.  The trio of buildings comprising the Deutscher Dom, along with the Französische Dom and the Konzerthaus, combine to create one of the most beautiful squares in Berlin which is the site of a picturesque and very popular Christmas Market every December.

Severely damaged during the air raids and the Battle for Berlin during the Second World War the church stood in ruins for many years until it was rebuilt from 1977 to 1988 before beinging bought by the German government and converted into a museum.