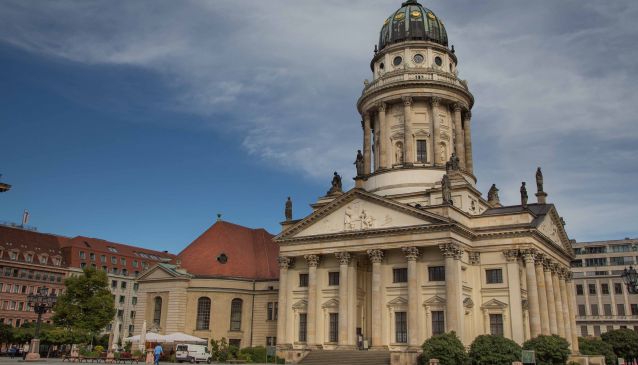 Although in German 'Dom' usually translates as cathedral, in the case of the Französischer Dom it refers to the 'Dome'.  Sitting next to the Französische Friedrichstadtkirche (French Friedrichstadt Church) it was designed and built to give the Gendarmenmarkt square a sense of symmetry, acting as a mirror to the tower of the Deutscher Dom opposite.  It has never been connected to the church next door and doesn't serve any religious function.

Badly damaged during the Second World War, the Französischer Dom was rebuilt from 1981 to 1987 and a restaurant was opened within.  From 2004 till 2006 the facade of the tower was refurbished at a cost of around 6 million euros, returning it to its original splendour.  The tower is now used for events, houses a small museum detailing the history of the Huguenot migration to Berlin, and also has a viewing platform offering beautiful views over the area.

Entry to the viewing platform costs 3 € and is open from 10am till 7pm (April to October) and 10am till 6pm (November till March) except during events.