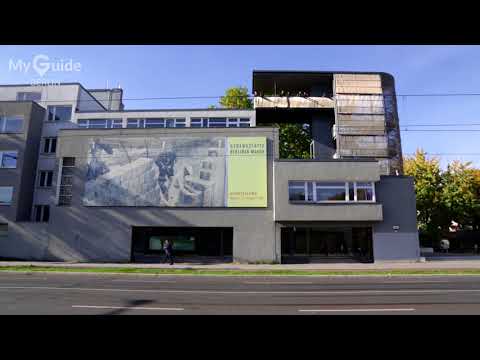 The Berlin Wall Memorial at Bernauer Straße is the first place we bring visitors to Berlin who want to learn about the wall - It is never crowded with tourists like Checkpoint Charlie, has heaps of information, and is really beautifully designed.

The Gedenkstätte Berliner Mauer, known in english as the Berlin Wall Memorial, is the main memorial site of the Berlin Wall.  It comprises a fantastic open air exhibition and memorial space at the original historic site along Bernauer Straße and also includes an information centre and a documentation centre.

The U-Bahn station, Nordbahnhof, has a small but informative exhibition on Berlin's 'ghost stations', stations that West Berlin trains passed through that were blocked off to East Berliners.  These stations were constantly guarded to prevent escapes to the west.  Included in the exhibition is some original footage of how the area was guarded as the West Berlin trains came past.

One of the highlights of the outdoor exhibition is the last remaining preserved section of the Berlin Wall, complete with guard tower and death strip.  A viewing platform provides a fantastic overview of the wall as well as the neighboring area.  For those that are unable to take the stairs, there is a lift provided which will take you all the way to the top.

As you make your way along the Berlin Wall Memorial you will learn about the people who lost their lives attempting to cross the border, as well as the evolution of the wall from a barbed wire fence to the final incarnation that we identify with today.  Part of the exibition includes the excavated cellars of the buildings that were bulldozed to make room for the death strip along with information about some of the families who found themselves cut off from their neighbours, friends and family overnight.

A nice interlude is a visit to the Versöhnungskapelle, the Chapel of Rememberance, which stands on the site of the former Church of Rememberance, detenated in 1985 because of its position right in the middle of the death strip.

Make sure you look down as you walk along, you fill find many plaques dotted around the site marking the sites of escape tunnels as well as tunnels built by the East German secret police, the Stasti, to thwart the escape attempts.  You will also see small plaques on the ground documenting the location of both sucessful and unsuccesful escape attempts.

In addition to the Berlin Wall Memorial itself there is also an Information centre and a documentation centre where you can learn more about this intriguing part of Berlin's history. 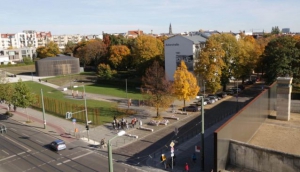