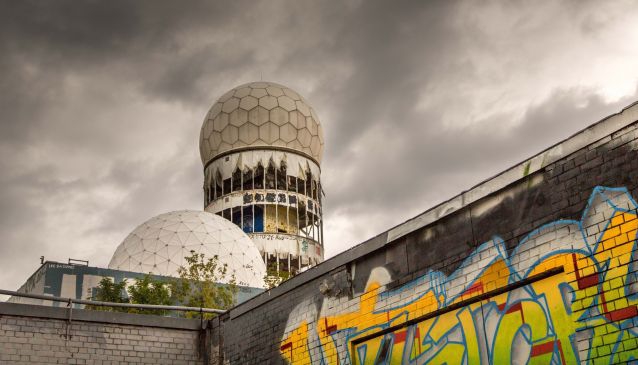 Make sure you take the opportunity to climb to the top of the tower and experience the amazingly unique acoustics of the radar dome!

The abandoned spy station located atop the 120m tall Teufelsberg is well worth a visit.  Although in the past, you could slip over a fence and explore the area alone, it is now fairly well guarded and protected by a group who have permission from current owner (read below for more on that) to guard the area and run tours, which they claim is for insurance liability reasons as technically the area is a building site.

Over the weekend they run a 2 hour historical tour at 1pm as well as an hour long 'led walk' which leaves on the hour from midday till sundown and costs 7 euro.  On the led walk you will get little to no actual information on the site or its history, instead you have permission to follow the group as they lead you through the site.  If you deviate from the path, you will be yelled at to get back.  That said, it is an AMAZING location.  Full of street art and graffiti and if you are into abandoned spaces you will love it (although it will chafe that you can't go and explore freely).

The view from the top of the tower is spectacular, with uninterrupted views in all directions.  Photographers will have a great time, with so many great things to photograph, from wide landscapes to photos of decaying buildings and street art.  The radar dome at the very top of the tower is still intact and due to its spherical shape has one of the freakiest acoustics we have heard.  Speak, and half a second later your echo will speak back to you as though someone is standing next to you.  Once a few people enter the dome it becomes a soundscape of voices, humming, singing, and whistling.

So, all in all, despite the somewhat restrictive nature of the tour, we would still recommend heading out there and parting with your hard earned 7€.  After all, there are few places like this anywhere else in the world!

A Short History of the Area

Teufelsberg, or 'Devil's Mountain', is actually a man made hill created from the rubble of around 15,000 buildings destroyed during World War Two and is one of a number of similar, albeit smaller, hills around Berlin including the two located in Volkspark Friedrichshain on the border of Prenzlauer Berg and Friedrichshain in Berlin's North.

Underneath the rubble is the unfinished Nazi Military-Technical College designed by Hilter's favourite architect Albert Speer.  After plans to blow the structure up failed, the West Berlin government decided to cover it up instead.  Up to 800 trucks a day deposited around 7000 cubic metres of rubble.  In total, the hill comprises 26 million cubic meters of rubble!  The whole area was then covered with earth and planted with trees.

After using mobile listening stations to intercept soviet military communications, the NSA discovered that the clearest signal was acheived atop the newly formed 'Teufelsberg'.  In 1963, construction began on what would become one of the NSA's largest listening stations.  From then until German reunification after the fall of the Berlin Wall, the area was highly restricted, leading to many fanciful rumours about what went on including one about a tunnel to a secret submarine dock!

After the Fall of the Wall, the facility was no longer needed and all equipment was moved out, leaving the buildings and their distinctive radar domes behind.  A Cologne based investment firm purchased the site from the Berlin Senate for 5.2 Million Marks (around 3.4 Million Euros) with plans to build a luxury hotel, apartments, day centre and spa.  Due to exploding building costs and a massive defence by environmental protectionists, the project became unprofitable and was abandoned.

Its future is now uncertain, with various ideas having been floated, from a spy museum, to razing it to the ground and reforesting the area.  If you'd like to have a look, you'd best not pass up an opportunity as it wont be there for ever.