Tours by Type Tours by Region 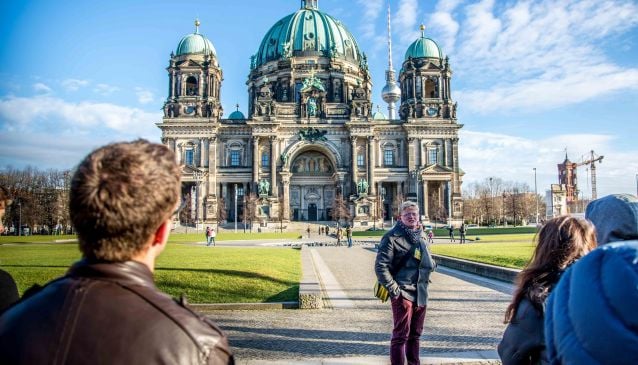 The Insider Walk offers visitors an invaluable insight into Berlin's history, culture and architecture and is the best way to get an overview of the city before going out exploring.

Insider Tour Berlin is Best For

Known for their high quality tours, the Original Insider Tour Berlin are one of the oldest touring companies in the city and have been guiding visitors through the streets of Berlin since 1996.  Their Famous Insider Walk, which runs daily, provides you with fascinating overview of the city beginning with its origins as a humble riverside village.  In addition to seeing pretty much all of Berlin's major sights, you will also learn about its history from the opulent years as the capital of Prussia, through to the decadence of the Weimar republic, the horrors of the Nazi regime, and of course the period that the city was divided by the Berlin Wall.  If all this sounds too much like a history lesson, don't despair:  Insider Tour's amazing guides somehow get through all of this historical material while keeping it light and easy to digest.  A mixture of personal stories, history and humour make for an incredibly informative but also extremely enjoyable experience.

After doing the Insider Walk where you will have gained a general sense of the city, we think it's then time for one of their more specialised tours.  With tours covering Third Reich Berlin, Cold War Berlin, Jewish Berlin and Berlin Today you will get a much more focused experience than could be covered in the general tour.  In addition to these great Berlin based tours, Insider Tour also offer day trip tours to Potsdam, Dresden and the Sachsenhausen Memorial located in Oranienburg, just outside Berlin.

With Insider Tours you can be confident that you are getting the very best.  They pride themselves on the extremely high quality of their guides, who provide unique and unscripted tours.  All of their guides live and breath Berlin and their enthusiasm for the city is utterly infectious.  For first time visitors to Berlin the Insider Walk is invaluable, but, even if you think you already know Berlin, the unique nature of an Insider Tour means that you will still learn a few new things and you'll come away with a much better appreciation of, and understanding for, this great city than you ever had before.

For added convenience they offer two different meeting points, one in the former West and one in former East Berlin.  Please Note:  Some tours leave from both meeting points, whilst others only from one - make sure you check before hand.

WEST:  Outside the McDonalds opposite the main entrance to S+U Zoologischer Garten Train Station (Hardenbergplatz 2-4, 10623 Berlin)

EAST:  In front of AM to PM restaurant at S Hackescher Markt Train Station (Am Zwirngraben 4, 10178 Berlin)

Tickets can be pre-booked at a discount on the Insider Tour website, or you can just turn up at the meeting point and buy a ticket before the tour.

Tour Overview - For up to date price and schedule information click the tab above.

Get a great overview of the history of the city and see all the major sights including the Brandenburger Tor, the Reichstag Parliament Building, The Memorial to the Murdered Jews of Europe, Checkpoint Charlie and The Berlin Wall.

Discover how the Nazi party came to power and uncover important historical sites such as the ruins of the Gestapo Headquarters, the air force ministry and the site of Hitler's Bunker.  Retrace the Red Army's steps as they liberated the city and learn about the last days of the Battle of Berlin.

After the Second World War Berlin became the main battleground of the Cold War as the two superpowers jostled for supremacy.  Discover the Berlin Wall and trace the path of the former Death Strip.  Learn about escape attempts at the historic Bernauer Straße location and gain an insight into what it meant to live in the GDR and the impact of the Stasi, East Germany's infamous secret police.

Today, Berlin has one of the fastest growing Jewish populations in the world.  Learn about Berlin's long history from the days of the Enlightenment to the darkest days under the Nazi regime.  Visit the New Synagogue and the Workshop for the Blind and hear stories of the many non-Jews who risked their lives to save their Jewish friends and neighbours.

On this tour you will learn all about today's Berlin.  This tour detours from the well-travelled tourist trail to show you four different Berlin neighbourhoods.  Discover a city grappling with issues of gentrification, immigration and assimilation and learn about Berlin's alternative and counter-culture scenes.

Initially used by the Nazis to imprison opponents of the regime, Sachsenhausen was designed as the prototype Concentration Camp and would form the basis for many that came after it.  Around 200,000 people were imprisoned there with around 50,000 losing their lives.  On the tour you will learn some of the personal stories as well as the institutional use of terror employed by the Nazis.

On this tour you will need a daily ABC travel ticket and we recommend bringing water and food as there is no place to get these one you arrive at the camp.

The Palaces and Parks of Potsdam were declared a UNESCO World Heritage Site in 1990 and are well worth a visit if you are in Berlin for more than a couple of days.  As well as the picturesque city you will also visit the Sanssouci Palace, Cecilienhof, the residence of the last Kaiser and site of the Potsdam Conference of 1945, as well as a former KGB jail and a town used by the Soviet secret service.  As a bonus you will also be able to sample some of the local beer in one of Potsdam's beloved beer gardens.

One of the most beautiful cities in Germany, Dresden was the residence of the Saxon Kings and is known for its cultural and artistic treasures.  Join Insider Tour for an unforgettable trip to this picturesque city and learn about its history, from its royal history to almost complete destruction during World War Two, as well as the painstaking restoration.  This tour is fantastic value and at €49 is actually cheaper than a return train ticket!  In addition to the tour you will also receive three hours free time to visit a museum, go exploring or sit and drink coffee in one of Dresdens beautiful squares.