Tell us what you're looking for...
Advertisment

"Where was the Berlin Wall?"

"Are we in former East Berlin or West Berlin right now?"

"Where can I find a Berlin Wall Map?"

These are three of the most common questions we are asked by visitors to Berlin.  The city has its fair share of important history, from the imperial grandeur as the capital of Prussia; the heady days of the Weimar Republic; the Third Reich under the Nazi Regime and the destruction of the city during World War Two, but it is the division of the City, the Berlin Wall and the Cold War that seems to have made the biggest impression.  Perhaps the fascination with the Berlin Wall stems from the volume of media coverage during the period, with televisions beaming the image of the Berlin Wall into homes across the world, not to mention the massive amount of spy and adventure novels, movies and television programs which featured the iconic border.  Maybe because it was front line of the Cold War, that battle of East verses West, Capitalism verses Communism, Democracy verses Dictatorship, and, with the threat of nuclear war as the Worlds Super Powers squared off, them verses us.

Whatever the reason, the Berlin Wall has captured the interest and imagination of Berlin's visitors.  After re-unification in 1990, the majority of the Berlin Wall which had not already been pecked away by souvenir hunters was officially removed and today only a few original sites remain which point to the division of the city which lasted some 45 years, almost 30 years of which were seperated by the Berlin Wall.

For a video of our favourite Berlin Wall locations click HERE 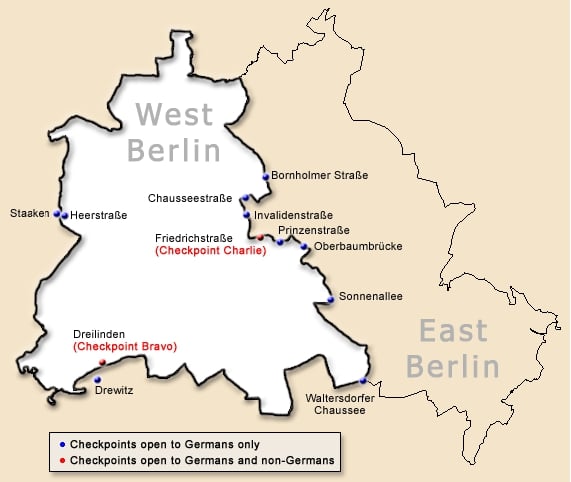 The Path of the Berlin Wall

The Berlin Wall followed the border set out in the Potsdam agreement by three of the victorious allies of the Second World War: the Soviet Union, the United States of America, and the United Kingdom which divided Berlin into four areas of occupation.  A border fortification was erected overnight on the 13th of August 1961... read our article on the building of the Berlin Wall for more detailed information about the Wall's construction.

Although the Berlin Wall was built entirely on land belonging to the German Democratic Republic (East Germany), the Wall completely encircled the zones occupied by the French, American and British, creating what was in effect an island of Western Democracy in a sea of Communism, supported by the USSR.  Road access to other western countries was possible after an agreement was reached but required passing through checkpoints and long border and passport controls.  Although the Wall completly circled West Berlin, they actually enjoyed a higher quality of life, and greater personal and economic freedoms than their counterparts in East Berlin, due, in large part, to the suppport of the Western Allies.

The majority of the Berlin Wall's 155km length separated West Berlin from Brandenburg, the area that surrounds Berlin, with only 43kms slicing through the city dividing East and West Berlin.