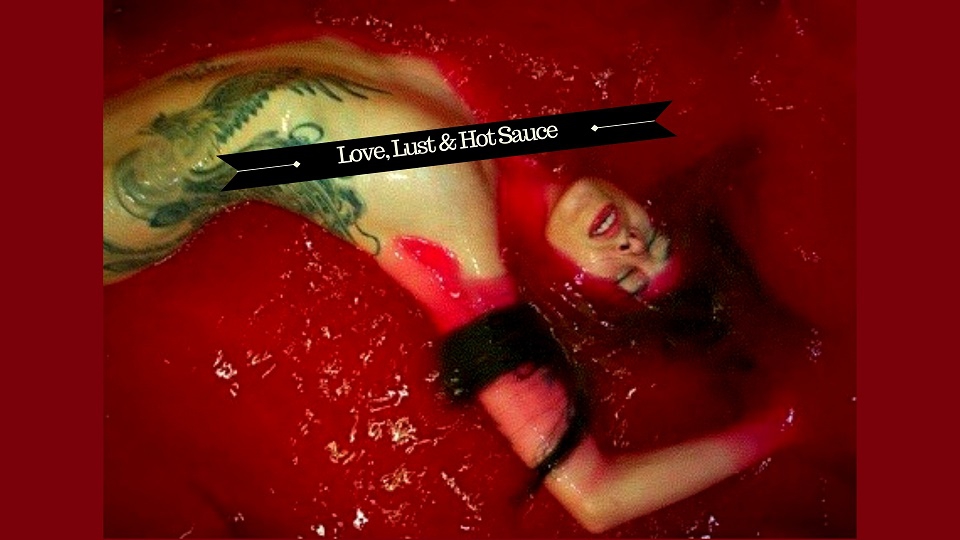 The next Shameless showcase will be a saucy selection of comedy, experimental variete, sensual burlesque, puppetry, a photographic booth installation and hot sauce taste testing.
Join us for spicy cabaret and super hot experimental live art!

And prizes from our tasty sponsors Crazy Bastard Sauce !

Shameless is a quarterly showcase featuring a motley bunch of art anti heros in international comedy, performance art, music and puppets! Hedonistic, independent and a little bit evil, anti-heros have more fun! Join us for a rollicking night of weird, funny and danceable talent in deep Neükolln.

Liliana Velasquez M. has crossed borders all her life. Raised in Miami Medellin and New Jersey there is no role she cannot play and her comedy reflects this extravagant mix in her Latina-tude, Catholic guilt and American dreaming. As an adult, Liliana recklessly explored NYC, slipping in and out of different art forms, costumes, and jobs. She has so many outrageous stories to tell, it would horrify her proud parents, Only now do they admire her comedic outlook on so many mistakes. Always hungry for new challenges, Liliana soon found other platforms for the performance that is her life: Berlin Neukölln. She is proud to be queer and not perfect and enjoys waking up in the afternoons.
As if that isn't enough, she is also leading lady at Freudian Slip Club, producing hundreds of shows in Germany every year.
http://freudianslipclub.wordpress.com

Paulina Lara Franco creates non-scientific surreal performances based on personal experiences, color and mixture. She has been a comic actress for more than 10 years collaborating with other artists in Mexico and England. Now she is based in Berlin and has a youtube channel where she talks about living in Germany, motherhood and makes fun of cultural differences.
www.paulinalarafranco.com

Alexander Windner Lieberman Began his professional career in Brooklyn, New York developing duets and site specific work with Movement Assembly while exploring butoh and burlesque with Kinetic Architecture. Worn down after 2 years of simultaneously dancing and hustling in bars and restaurants, my decision to leave New York City was accompanied by a chance audition with Pilobolus which shaped the following 7 years of my life.
Extensive worldwide touring with Pilobolus’ shows Magnifico, Shadowland, Shadowland 2 and a multitude of custom created corporate pieces performed in venues ranging from traditional theaters to arenas, live television broadcasts to conference centers introduced me to innovative projection work and shadow making.
In between touring I found myself working on the creation of Puz\zle with Sidi Larbi Cherkouai, developing my own aesthetic by collaboratively creating and producing immersive multisensory performances, cofounding the Charlotte based dance theatre company Taproot and teaching myself photography, videography and live projection manipulation.

Duckie L'Orange is a Berlin based performance artist with a twist.
She does weird and wacky interactive performances for kids, and equally wacky but significantly dirtier shows for adults. She’s been all around town like a hipster on a vintage bicycle – from performing at the Sydney Opera House, barking in a steam punk carnival with Antigua i Barbuda at Sydney Festival, touring Germany with the Puppetry Slam Berlin to creating shows in the jungles of Kalimantan and Timor Leste.
www.duckielorange.com

David Hailey is a seasoned comedian that has headlined on various stages across the world, from California to Asia, before calling Berlin home. He is known for his jovial take on everyday life and quick wit.

Wynton Kelly Stevenson is a musical storyteller with a twist. His musical journey is crafted with vocals, harmonica, beats and live looping. Sponsored by Hohner Music he has been touring and living in Europe for 10 years.

Crystal Tassels, 'The American Brat Queen,' is a burlesque artist, chanteuse, and fetish performer from Seattle, USA. After making her burlesque debut in South Korea, Tassels spent six years performing in the USA and Canada and is now based in Berlin. When she's not singing or stripping, you'll usually find her impersonating her cat.